We work wíth our customers instead of for them

Genesis is the market leader in coating for art and interior. And that is for a reason. Because in addition to the high-quality finish, the unique formula of Liquid Gloss® is a high quality product that we can’t find anywhere else. A result of many years of experience. Just add some craftsmanship, passion and innovative ability, and it immediately becomes clear where we derive our success. Eyal Reches is founder and co-director. He tells more about the origin and development of Genesis.

Eyal begins: “I started a print postal company in Germany and traveled a lot to America to buy original prints for the European market. On such a trip I once encountered 5000 prints. I was convinced that, with the right finish, there would be a lot of enthusiasm for this in Europe. After some pioneering I came into contact with an American manufacturer of epoxy. I was immediately impressed with the product and decided to look more into it. With two signed contracts in my pocket, I flew back to Germany and got straight to work.”

From trade to production
“My first creations with an epoxy finish were made in a space of 70 square meters. That space quickly became too small. At a fair in Frankfurt, I received two major assignments from none other than the director of Walt Disney Europe and the director of Verkerke print. That gave me sufficient resources to develop further. At first as a trading company and later it developed into a production company. In 1997 this eventually led to the founding of Genesis PD. I increasingly worked with galleries and appeared regularly at openings. My network of artists expanded considerably. This resulted often in intensive collaborations. I was proud to provide precious works of art with an epoxy finish.”

“Years ago, I saw Daanoe’s work in a gallery on the Herengracht,” Eyal explains further. “I liked his art very much and invited him to visit me. An epoxy layer turned out to be a great framing method for his photos. I introduced him to a gallery and nowadays we still work together regularly.”

Patented
“Epoxy in itself is a simple product. But since we apply it to many different materials, we always have to deal with different properties. Testing is, and will always be, very important. The product can always be improved. At some point, we did reach a certain quality level and named our transparent two-component resin Liquid Gloss®.”

Intensive production process
Eyal continues: “Although we have developed a unique formula with Liquid Gloss®, we also distinguish ourselves from other suppliers by our intensive production process. Everything affects the result; the way in which the epoxy is applied, the space in which it is applied, the amount of light and last but not least: the people who manage and carry out the casting process. After all, it is human work, and it must be done very accurately. By gaining endless experience, you automatically get a feeling for it. We sometimes sell our Liquid Gloss® to parties who want to get started with it themselves. Yet most of them refrain from doing so. The application of the last layer often goes wrong. Until now, no one outside of Genesis has succeeded.”

Custom made
“I would like to create something new. Every object is unique and custom made. In the beginning Genesis turned on mass production, but we stopped doing that twelve years ago. We now focus entirely on art and design. That should be the customers motivation as well. If a low price is a customers’ starting point, they have not come to the right place.”

“When an artist or designer is interested in our Liquid Gloss®, we always try to think along and create something beautiful together. After all, we work with our customers instead of for them. I love to find out things together. This usually involves a lot of testing and experimentation, because we like to try everything. It sometimes happens that things turn out less well. Yet I never speak of a failure. That is also part of our profession; learning by doing.”

Changing market
“We are doing well, despite corona. Unfortunately, the number of openings has decreased drastically, but we are adapting to the new reality. People now buy a lot more online, which requires a different approach. This is because less money is spent online than in a gallery. Fortunately, by keeping the supply somewhat smaller, we are able to operate in this changing market.”

Eyal explains: “A table with wallpaper, for example, is very popular nowadays. We can turn an everyday product into something special. After all, everyone has a dining table. With our knowledge and materials, like technical experience, machines and a dust-free casting area of 300 square meters, no additional investments are required.”

Further development
“In addition to collaborating with artists, our creative partners play an important role as well. One of them is Marcel Salome from Re-Art. In 2005 we came into contact with each other, and a long experimental period with our Liquid Gloss® and Re-Arts fine paper began. Since we believe we can achieve many more beautiful things together, we have joined forces by starting a new company called Salome Reches. It is a kind of gallery for galleries. Any artist is welcome to join. Currently we represent about 20 artists. Salome Reches operates fully independent from Genesis and Re-Art, and has a separate marketing and production strategy. Genesis and Re-Art are important players though, sales run through our own channels.”

Attractive company
Eyal concludes: “Genesis has never been very prominent outside her playing field. That made sense, since we only work for third parties. We are very well known in the art sector, as well as in the interior construction world and the hospitality industry. We are now ready to put Genesis more on the map outside of these branches. Salome Reches will certainly contribute to good exposure. Besides, we are working on a number of other developments that will allow us to increase our brand awareness and expand our customer base. Despite the existing success, it is good to keep looking ahead in order to further develop our company. I will always continue to make an effort to take up that opportunity. Although I can honestly say that we do have a wonderful company after 22 years.” 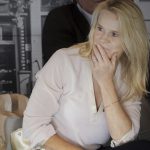